This week has come and gone... as many weeks do but now is the time for this week's blog post.

Hobby wise, I have been trying to get my heavy weapon teams finished for the second platoon but have not quite managed it. Here is what I have finished: 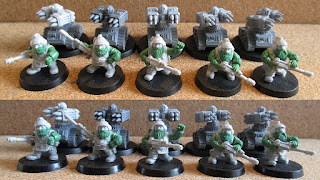 The picture shows five gunners and five heavy weapons (from Anvil Industries) all ready to join two infantry squads and a heavy weapon squad. I have yet to finish the loaders but they are on the work bench waiting for the second layer of their arms to be put on, then glove cuffs and then backpacks with missiles. I have managed to find some small tubes that will work as missile containers so hopefully, I'll get the loaders sorted at some point this week.

Unfortunately, my week has caught up with me and today's sculpting plans have completely stalled due to me being completely shattered.

So what else have I been up to? Well, the driver 'bust' is currently sitting with a layer of gloss varnish on... so it is finished (photos will be taken when it is dry enough to handle) and I have also been working on my first Bullgryn. Here is an early WIP: 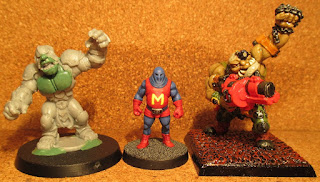 He is shown on the left with a human from Hasslefree Miniatures and a classic Ogryn from Games Workshop (OOP). He has moved on a little since the picture was taken but I just don't have any motivation to take photos at the moment.

Here's a question... why do I painstakingly sculpt so much when I could easily make a few sets and then cast up as many as I like?

Well... I have been sculpting stuff for almost 30 years and I have become quite tolerant of the process. I can usually create roughly what I want, to a standard that I can put up with. It doesn't use a huge amount of materials (putty and wire), doesn't take up too much space (a pencil case for putty, wire and sculpting tools) and is an artistic process that I sometimes quite enjoy. Add to that the fact that a sculpt is unique and there will never be one exactly the same and it all mounts up to quite an enjoyable experience.

Casting is for bulk stuff (usually) and uses lots of smelly chemicals, takes lots of equipment and needs a lot of space (especially if you have pressure pots and the like). It also takes a lot of preparation... and no matter how carefull you are, moulds run out and resin misbehaves and things get expensive very quickly.

I think that some people are under the illusion that I am not just a hobbyist. Yes, occasionally, I take on commissions but I try not to make a habit of it because, quite frankly, I'd rather be sculpting for myself. Recently, I completed the Squat commission and I really enjoyed that... but only because it was a spin off from what I was doing for myself and also because each of the miniatures was a character in its own right... so it kept me entertained. Not every commission has done that and, regrettably, there have been commissions that I have hated to a point where I have had to stop and return money. That is why I am very reluctant to take them on.

As a hobbyist, I never plan on making stuff for mass production because I don't normally need that many. There is also the warm feeling you get after sculpting/converting a unit of troops and it is all hand sculpted. It is an art-form... not just a process.

All that said... my retirement project DOES involve casting but that, as they say, will be a whole new ball game and will be so riddled with Intellectual Property implications that it is unlikely to see the light of day, let alone be publicly available for sale.

So... why do I sculpt instead of casting bits?

Because it's my hobby and I bloody want to!

See you from the ball turret!